Readers aged 18–34 are spending nearly twice as much time with newspapers' print editions than with their websites and apps.

This is one finding from my new study, co-authored with Richard Fletcher from the Reuters Institute at Oxford University. We used a large-scale survey and online user measurement to investigate the total time spent with newspapers in print and online.

Our results show that, despite falls in the circulation of newspapers and increases in news consumption via smartphones, readers of all ages still spend more time with newspapers' 'dead-tree' editions than with their websites and apps.

For younger readers, like for middle-aged and older consumers, newspapers' print editions provide an experience they invest time in, compared to how they snack on and scan news online.

Our study shows that newspapers' 18–34 year old print readers spend an average of 23 minutes reading each weekday print issue (and more on Saturdays and Sundays).

However, those same newspapers' 18–34 year-old online readers visit the brands websites and apps for an average of less than one minute per day (43 seconds).

Our report reveals one exception to this trend, the Daily Mail. Brits under 35 spend more than twice as much time with the brand online than in print. The popularity of MailOnline with younger readers is clearly due to an editorial approach focussed on entertainment and celebrity—very different in character from the more conservative stance taken in print. 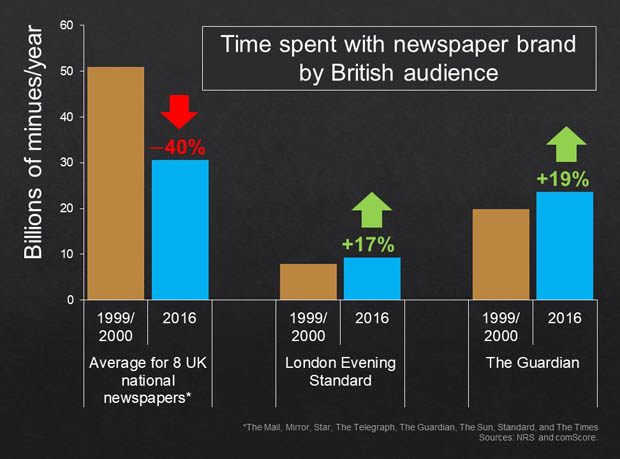 Although most newspapers are attracting more attention from younger readers via their print editions than via their online channels, the young are spending less time with newspaper brands than they used to, even though digital distribution has made access easier and cheaper.

Our report compares the time spent with newspapers in 2016 against the time spent at the turn of the millennium. Overall there has been a 40 per cent drop, with much larger falls in the attention coming from younger (-64 per cent) and middle-aged (-57 per cent) readers than from the older (-14 per cent) audience segment.

However, some newspaper brands have bucked this downward trend in visibility. Our report found that the total time spent with The Guardian and the London Evening Standard by their British audiences had actually increased since the turn of the millennium, by 19 per cent and 17 per cent, respectively.

In the case of The Guardian, we credit the gain to the title's relatively successful online editions, which have attracted more attention than has been lost from declines in its print readership, and to Brexit and Trump 'bumps' in print readership in 2016. In the Standard's case, becoming a freesheet in 2009 boosted readership—and, as a result, time spent with the brand.

Our report calculated the total time spent with eight UK newspaper brands (The Mail, Mirror, The Sun, Star, Standard, The Telegraph, The Guardian, and The Times) by their British print and online (PC and mobile) audiences (aged 18 and over) using data from the National Readership Survey and comScore.